Matt Capps is a special closer. And the Nats are looking at him.

According to a couple Twitter sources and Chico Harlan over at the Post (He's still not gone? Jesus. Dude ditched the beat eons ago and announced his leaving like a month ago...), the Nats have more than a passing interest in Matt Capps, ex-closer for the Pittsburgh Pirates.


The Nats have serious interest in reliever Matt Capps, formerly of the Pittsburgh Pirates. And Capps has serious interest in the Nats. Capps, non-tendered over the weekend, has attracted interest from roughly a dozen teams, but his agent, Paul Kinzer, said that the Nats are in a group of six or seven finalists.


Now, I wrote about Mr. Capps' demise back in June of 2008. He came into that game on a great run, but the Nats devastated the guy, and destroyed his will to win.


In his first 27 games, Matt Capps hadn't blown a save. When the Pirates came to town, the Nationals broke that streak by not only having him blow a save, but by getting the win that night (6/10). He then went on to blow 2 more saves in his next 3 games (6/14 and 6/15)! He's done. Pitt needs to sit him, cause he'll never be the same. He sees Nationals in his sleep.

Now, I can spout numbers till the cows come home, but nothing I can say would do Matt Capps any justice. You see... he brings much more to a team than just saves and strikeouts (and hits. And walks). He brings with him the hopes of millions and millions of special folks all around this great country. Yes, Matt is an inspiration to all special needs people around the world, as he's a Major Leaguer now. He fought through a lot in his life with his special set of life skills, but he has persevered to be among the best in the world at what he does.

Wait... what? Capps isn't "special" you say? Well then, allow me to retort! 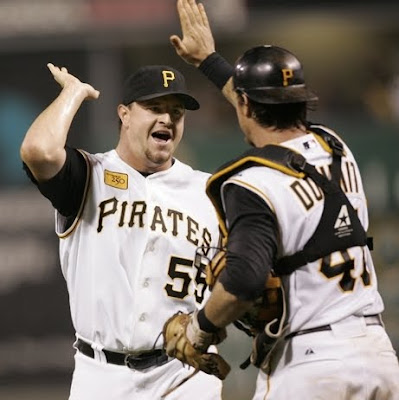 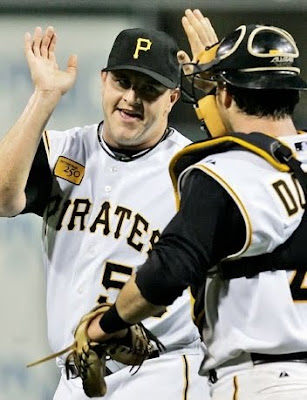 What's that? You're speechless? Then my work here is done.

Labels: matt capps, special needs people would drag me behind a car if they could, the capps face

I wrote last week about Collin Balester joining Twitter, and after laying dormant for a few months, Joel Hanrahan finally started throwing out some tweets. He had this to say while watching the Bears game on Thanksgiving:

Joel, obviously getting tired of Collin's incessant Twittering came back with:

@ballystar40 yeah, i dont think everyone needs to know everything i do, and my scorecard on the golfcourse, cause it would dominate yours

Which, may or may not be true. Yes... Collin tends to ramble and post anything and everything, but some people like that. And some people might enjoy Joel doing the same thing. (I'm not sure if I've ever mentioned this, but Joel was my favorite National when he was with the team. We would say hi to one another during games, and he was always very nice to me and my wife at team events. He would recognize us and say hey, with some small talk. Good guy. Solid guy. This didn't stop him from allowing me to wager $20 on Teddy winning a race during a game in which I'd clearly had too many, however. ('Cause anyone betting on Teddy had to be shit hammered.) The good news? The next time I saw him he said I could keep my $20. So nice of him, since he makes 754% more than I.) Anyway, Balester points out that Joel has, in fact, been reading Collin's tweets:

@hanrahan4457 well I see you follow me pretty close haha

Then Hammerhands LAYS DOWN THE HAMMER:

@ballystar40 yeah you take up the whole home page with all your tweets, nerd

BOO-YA! That's how fucking closers close, goddammit!! Told him! And his Mama! Joel basically said, "Get your dirty ass 'stache and your dirty ass pocket protector back to Geometry class, bitch!"

To which Collin could only respond with this: 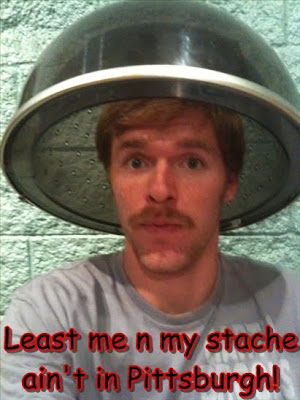 Oh, and Johnny Lannan has made his presence known on Twitter as well, joining today. Follow the man, the myth, the legend... The Utley breaker himself... Eyebrows!!
Posted by Section 138 at Tuesday, December 01, 2009 1 comments