At least we still have Livo.

Well, for now, at least. The trade deadline is fast approaching and someone somewhere might need an injection of COOL AS SHIT into their clubhouse for a playoff push.

Livo's always showed the demeanor of a cucumber on the mound, and in Wednesday's ballgame, made one of the most nonchalant plays in the history of base ball. (That's, like, going all the way back to what it was called when Old Hoss Radbourn played.) He threw his ¡Livo-ball! to Hanley Ramirez, who proceeded to hit it right back to him. How does Livan field it?

Like a goddamn pimp, that's how. Shit, that man be so cool, women give him their phone numbers. (I'm living proof that this is the most difficult thing to accomplish on the planet. Split an atom? Shit, son, that's 8th grade physics. Have a women give you her number (her real number) unsolicited? Professor Livo teaches that fucking class.)

So, just how cool is Livan Hernandez? Well, word has it that Frank Sinatra approached Albert Einstein in the 1940s about inventing a time machine. What did he want to use the time machine for? Oh, you know what he used it for. To go to the future, visit the smoothest living male of all time, bring that man back to 1960's Vegas, and party it up with that bad mother fucker like no party has ever been partied. In fact, I hear there might just be a couple pictures floating around of that very event... 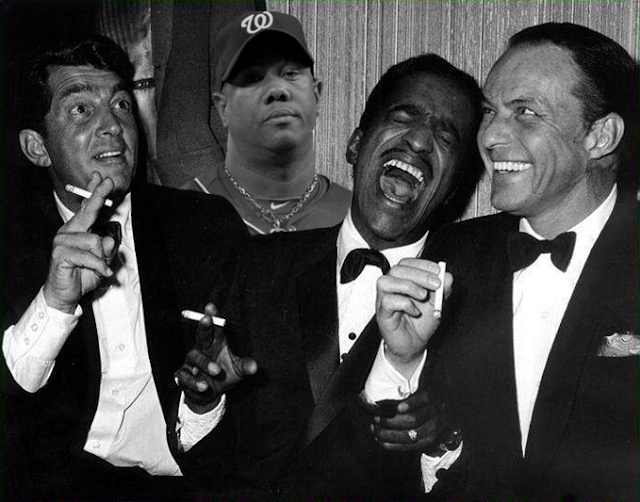 Ahhhhhh, yeah, Livo. You bad. I mean, look at you, looking like you don't give two shits about nothing. You bad, indeed.
Posted by Section 138 at Thursday, July 28, 2011 1 comments

In making my afternoon visit to Nationals Prospects (What, like you don't visit the same websites multiple times per day? Alright then, Mr. or Mrs. "I love getting my news and LOLs hours, or even DAYS later than everyone else." Good luck when the goddamn zombie apocalypse breaks and Nationals Prospects is the only place in the entire world to have that info! Don't come crying to me asking for zombie brain smashing equipment, you should'a known about the breakout same as me.) I came across this devastating news:

Matt Chico was released by the Washington Nationals.

Now, while I know his name has been used by some bloggers and Tweeters as a running joke, I never had nothing but love for the brother. See, on the God awful 2007 Nats squad, all the kid did was take the ball every time they asked, and he led that team that year with 31 starts. Sure, he also led that squad in wild pitches and, if it wasn't for Jason Simontacchi, he would've also led that team in WHIP, but the kid gutted it out. He won my heart that year, and if you search this here blog using that label Chico Man, you'll find he was the first Nat I actually developed a man crush on. I mean, Christ, I named my first born daughter Matilda Chica for shit's sake. (Even if it was only on Twitter, and not the actual birth certificate.)
So, as I prepare myself to journey to the beer store with nothing but thoughts of pouring a few out for the Left Coast Lefty in my head, I leave you with one of my first posts after Matty returned from Tommy John surgery in 2009. If you find yourself tearing up while reading it, fear not, for it only proves two things. 1) That you love, love, love pink, and 2) That Matt was sent from above by some higher form of life to inspire and....
I can't do it. I can't write any longer. Sure is dusty in here... God speed, Mr. Chico.
-------------------------------------------------------------------------- 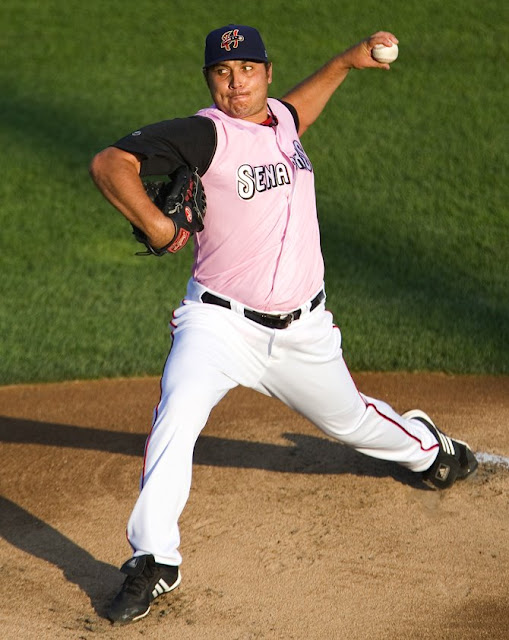 Yes, ladies... the left coast lefty made his AA rehab debut over the weekend. He also happened to do it during Harrisburg's "Pink Weekend", which is a team effort with the Senators and the Pennsylvania Breast Cancer Coalition.

So, he not only stole some hearts that night, but he stole some of cancer's evil, evil powers as well.

Be on the look out for Matty and his newly bionic left arm sometime soon at a ballpark near you (if you live in Harrisburg, Syracuse, or the DC area, anyway). He might even let you carry his glove, if you know what I mean.

Labels: Chico Man, excuse me while I go cry, I'll miss you sir

Have I never used that as a post title before? Well, shit, my tacky side apologizes for avoiding that until now.
Anywhoo, hooray Tyler Clippard! Our boy got the win last night for the victorious National League team in the 2011 All-Star-Replacement Game. What role he played in that win doesn't matter. He got the win. And a win is a win is a win is a win.
Oh, wait... he only faced one batter? And gave up a hit to that batter? Again, so-goddamn-what. As long as Tyler himself enjoyed and embraced his part in last night's game, so do I. Here's what Clipp had to say:

"What a way to do it. That's probably the definition of a vulture win," Clippard said. "It was fun - great experiences, something I'll never forget."

Now, here's what I have to say: 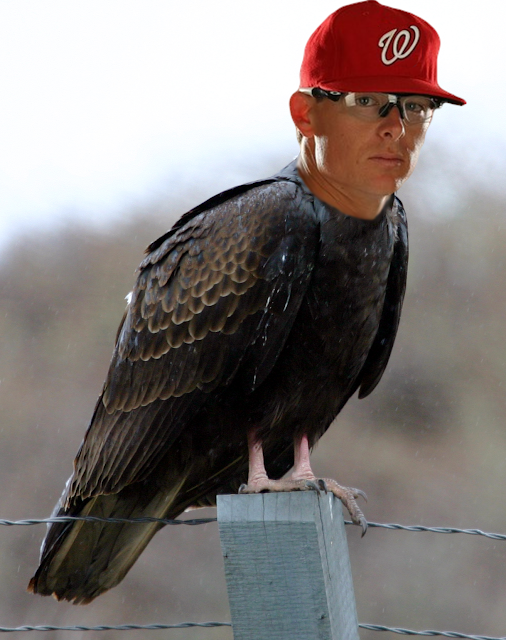 Soar high, Tyler. Soar. Fucking. High.
Cherish this moment, Clipp. You've earned the opportunity by being one of the most dominant relievers in the league, and certainly the most valuable member of the Nats bullpen over the last couple years. With that magical high fastball, that majestic change up, and that incredible knack for vulturing wins, you've established yourself as the baddest-ass raptor on the planet. Well, okay, bald eagles are some bad-assed fuckers... but let's see one of them compile a strikeout per 9IP ratio anywhere close to your 11.00. Nope. All they do is fly, and kill mice and shit. Big whoop. Call me when they have a better inherited runners scored percentage than your 19%, then I might begrudgingly shake their wing. (But it will be a limp, sweaty hand to wing shake, dammit. That's just how I roll.)
Posted by Section 138 at Wednesday, July 13, 2011 4 comments

Bryce Harper gets to play with Derek Norris.

Well, it appears the Washington Nationals front office really, really likes Bryce Harper. So much so, in fact, that they skipped him forward a level, choosing to bypass the high-A Potomac Nationals, and sent him directly to the AA Harrisburg Senators. (They did allow him to pass go, however, and also allowed him to collect the $200 for it. Which for Bryce, is like... what he throws at bums while in his GIANT-ASS HOOPTY at intersections.) I cannot tell you how much this move favors Bryce. I mean, the Nats think so highly of him, that they are going to let him play with the man-bot himself, Derek Norris! (DeNo and I go way back, of course.) Bryce and DeNo got together a little before the game, and Harper peppered Derek with all kinds of questions. "What does this guy throw?" "Any hot babes in the crowd tonight ask about me?" "Where can I get super cool laser eyes like you?"* "Can I have your autograph please, Mr. Norris?"

*Derek does, indeed, have super cyborg laser eyes that can tell what pitch is coming, its speed, and its location. It's not recognizable to the naked eye, but if you spend enough time scouting stalking DeNo as I do, you can tell the exact moment he uses them, and can snap a picture if you're quick enough. I caught him in the dugout w/Bryce, using his powers last night: 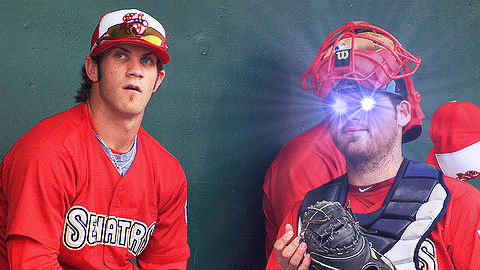 See that look on Bryce's face? That's the "Whoa, shit goddamn, man!" look. He gets it around DeNo, Ryan Zimmerman, and when he's watching CMT's Biggest Redneck Wedding Ever. (What? He's not a redneck? Shiiiittt, did you even look at that link above about his hoopty?)

So, what happened last night? Well, Bryce did... okay (2-3 2 1B, 1 BB) but DeNo put an absolute ass whipping on the opponent, the Erie SeaWolves. (The what? SeaWolves? I ain't never seen any wolves swimming around in the sea, but... fucking whatever, man.) Derek went 3-4 w/2 HR, 1 2b, and a walk. That is called raking, my friends. And Derek raked till he couldn't rake no more. That'll do, DeNo. That'll do.

(There's also another argument going around that the Nationals didn't want Bryce to play for Potomac because of their field conditions. Apparently the outfield is a swamp that has alligators in it that eats outfielder's legs and shit. Or something. All I know is that it doesn't drain very well, and since it's rained quite a bit lately, the field is often unplayable. If this is the scenario that really happened, well then... Bryce Harper turned to his friend from above for some help. 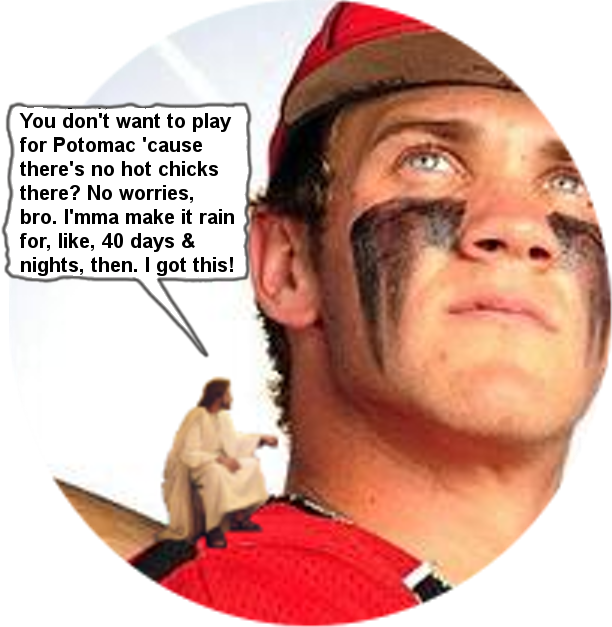 (Hooray, I'm posting old blog gimmicks again! Do you know where the above picture is from? You don't? Well, then, hooray for today! You're truly lucky, I must say! Click here and waste your time away!)

Sorry about that rhyming above. This is what happens when you have a one-year-old that wants you to read her Hand, Hand, Fingers, Thumb a gajillion times in a row. I love her to death, but if I recite "Dum Ditty, Dum Ditty, Dum Dum Dum" a few more times, I'm going to snap the next time I hear a drummer. Some poor kid playing some buckets outside the Navy Yard metro station after a Nats game is going to have a skinny white guy attack him like Dmitri Young going after the last bag of Chips Ahoy! in his house. It won;t be pretty, my friends.
Posted by Section 138 at Tuesday, July 05, 2011 0 comments