Well, we all remember Collin had his blog that ran for a little while, right? (Right??) Well, Bally has jumped feet first into the land of Twitter. You can follow him and his tweets here. So far it's been a nice Twitter feed. We've heard about him shattering windows off the tee box and how he dominates in kickball. The best thing so far, though?

Behold... the power of lip hair. 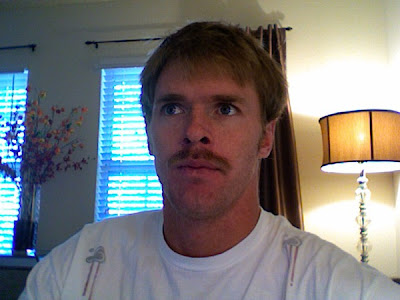 You're rocking the shit out that stash, Bally. Thanks for trying to fill Nick Johnson's shoes.
Posted by Section 138 at Tuesday, November 24, 2009 0 comments

Yes, folks, Jimmie Riggs just had the interim tag pulled off his title. Your manager of the Washington Nationals for 2010 and... well... beyond is the local boy made good that took over last year for Tony Robbins Manny Acta part way through the season. I found out last night and gave GM Mike Rizzo a call to ask a few questions. The following is a transcript of the conversation*.

Me: Mike, thanks for taking a few minutes of your time, I appreciate it.

Rizzo: No problem. Happy to do it. I'm actually at dinner, though, so we need to make it brief.

Me: Will do. Actually, I guess I'll combine two questions into one to get this done twice as fast. First, what did you order, and second, why Jim Riggleman over the other candidates?

Rizzo: Well, I was wanting something top shelf, really tasty and good, but with the situation being what it is I settled for something from the rail. You know, house stuff.

Me: Can you expand on that?

Rizzo: Sure, sure. I really wanted a scrumptious 12 oz filet with a delicious Caymus Special Selection Cabernet Sauvignon . Then, I figured that with me having a cold and no taste or smell, it wouldn't make any sense right now. So I went with the hamburger and a bottle of Ernest and Julio Gallo.

Me: I see, and what about the answer to second question, the hiring of Jim Riggleman?

Rizzo: Uh, I was talking about Jim.

Me: Of course you were. Right. Sorry. So what did you end up ordering to eat, then?

Rizzo: I just had a mixed greens salad with chicken.

Me: Sounds delicious. Any concern about Riggleman and him handling such a young pitching staff? Strasburg and Zimmermann in particular?

Rizzo: No, not at all, why would you ask?

Me: Well, according to Keith Law, when Riggleman was managing the Cubs in 1998, he had then 21 year old Kerry Wood exceed 120 pitches in eight out of his 26 starts. Also, in start number 25, Riggleman had Wood throw 133 pitches.

Me: You there, Mike?

"Fuck your bill, pal, he's gonna break my poor Strasburg in half!"
/CLICK


*Real/dream, who knows? I confuse reality with make-believe often.
Posted by Section 138 at Thursday, November 12, 2009 0 comments

Yay, Zimmy! Let's hope it doesn't weigh you down too much and take away your range. Looks good on ya, kid. 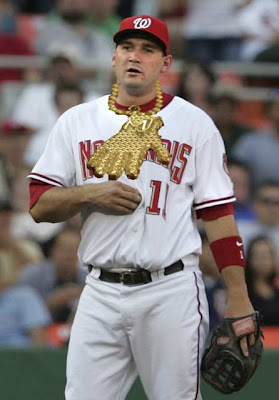 Well, I was all set to see two Nats prospects play in the AFL Rising Stars Game last Saturday. Then, word came out that Stephen Strasburg was pulled from the start because of a neck injury. Given that he's now a National, and injuries only prove horribly horrible, I decided to dig into the issue, and see what the real deal was. I traveled to Arizona (In my mind! Beat that, Uri Geller!) and back in time (Take that, Doc Brown!) to see the throwing session that caused Stras the injury. I must warn you... if you have small children reading this blog, you may want to have them turn away. And you may want to reconsider your parenting model. I'm not sure I would subject my kid to "shit goddamn" as often as it is uttered here. Anyway... onto the film...

Gah! SHIT GODDAMN! But hey, I hear this Strasburg kid is tough, so maybe he can just rub some dirt on it and he'll be okay.

But, it wasn't all bad for the Nats in the Future Stars game. My bestest buddy, Drew Storen, made an appearance. It's justtoo bad the home plate umpire decided not to show up, though. Drew came into the game in the bottom of the 8th with his squad up one run. He battled the first hitter, throwing at least 7 pitches to the guy, if my shitty memory is correct. He had the dude 2-2, and absolutely froze him on a breaking ball. Perfect pitch. I swear. Check it below.

Am I right? It may appear to be a tad low, but the ball passes the plate before the catcher catches it. I'm convinced Blue screwed the pooch on this call. I froze the video at the point I feel the ball crossed the plate. 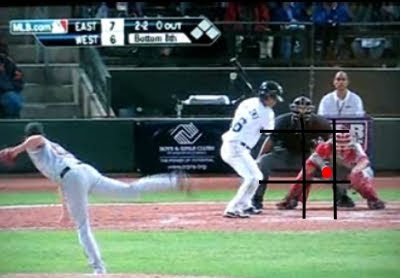 Those that have followed this blog since the beginning are insane know that I umpired everything from 7 year olds, to Varsity, to wood bat Travel Leagues. In the words of some of the parents that got me to eventually quit umpiring, "Fuck you, Blue! - It's all about you, Blue! - Way to rob my son, Blue! - If my kid commits suicide over this, Blue, I'm gonna fucking hunt you down and kill you!" (Seriousness alert! - All but the last one I actually heard directed towards me. Mostly in NOVA Varsity games. What's with these parents these days?)

Anyway, Even if the ball crossed the plate where the catcher caught it, I still feel the tip of the ball touched the bottom of the zone. What happened next? The batter hit a weak sauce infield single to the second baseman, who couldn't get a handle on it. Then up stepped the catcher, Matt McPoopy, who hit (sorry, Drew) a grooved fastball over the left field wall for a 2R HR. I can only assume McStupid was looking fastball, and Storen gave him one up in the zone. The good news? Drew acted like a goddamn closer should, shook it off, and got the next three batters out in a row with a ground out, and two Ks. Atta boy, Drew. Even if you did do it in long-ass soup-sandwich looking pants. I can look past a player crushing my hopes and dreams if it means betterment of the team. Hell, if I cared too much about every time something crushed me, I would've been dead when Shawshank was robbed at the 1994 Oscars. (Fuck you, Forrest Gump!)

Today is also GOLDEN WEDNESDAY! The NL Gold Glove awards are announced, and Zim should certainly be heading home with the 3rd base trophy. What's that? Derek Jeter won for AL SS yesterday?