Ryan Zimmerman is taking over TEH WORLD!

I got a chance to see Ryan (and a lot of other guys) last week during the Winter Caravan thingie. I have another post to write on that entire subject, and I promise it's coming, but I want to focus on Zimmerman first, as he is now laying claim to everything baseball.
As you know, he won not only the Gold Glove for NL 3B, but the Silver Slugger award as well. That, my friends? Not. Too. Shabby. So, I got to see him at White Flint mall last Saturday, and casually congratulated him on that. His response was something like, "Meh, thanks. I appreciate it. I worked hard, and it payed off."
Ryan... dude... for the love of the Jesus, you can walk the walk, but talk the goddamn talk, brother! You know what I want to hear from you? "Thanks, man, I deserved it. I mean... did you see me out there? I was fucking magnificent. Seriously... I played my ass off, and it showed come award time."
Well, I think he read my mind, cause just yesterday I powered up my PlayStation and threw in my copy of MLB '98. (What? I should have a new fangled PS3, or a Wii? How bout you throw some cash my way via my paypal account and I will. You guys already came up lame buying me this and this, though, so I won't hold my breath on the game console.) And what happened when I pushed the power button on my PlayStation, and MLB '98 started? Zim, the goddamn man that he is, has transcended normal human boundaries, my friends. He is now destroying the machine world as well. Take a look, as I was lucky enough to have my video camera not only powered on, but recording the TV at the time! Seriously!

Zim hacked my game from Section 138 on Vimeo.

It's only a matter of time before he's manipulating our minds into doing all his bidding. Which I will gladly do. For reals.

Still with me? Good, one last story. I also asked him why Karl Ravech was calling Ryan "Z Pack" on the ESPN Web Gems special. Ryan's answer?
"I have no idea."
"Where did that come from?" I asked.
"I think it's a drug, some kind of antibiotic."
"But you've never been called that before, right?"
"Nope. Never."
"But... you didn't correct him?"
At which point Zim just kinda shrugged his shoulders. 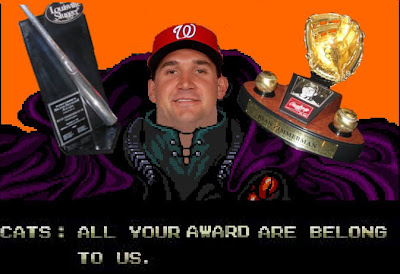 (Wiki link for the reference that inspired the picture for those of you that are too young, too old, or too like my wife to understand it.)
Posted by Section 138 at Thursday, February 04, 2010 0 comments