Well, according to Chico Harlan, he is.

Zim: I'm trying to convince everyone to come. I mean, he likes this place. He [Adam Dunn] likes everything about it, and obviously he knows Jim [Bowden], he knows what he's about. There are a lot of ties that are kind of in there. But it kind of goes back to what we were talking about before about the business side. He's kind of got to wait and see what happens. There's still some time. There are a lot of good players still out there, and we'll kind of see what happens when those other guys start to sign.

That's what the hell I'm talking 'bout, Zim! I like him taking an active role in the building of this organization. I'm also glad he's reaching out, and not just relying on Austin Kearns. My love for Kearnsy is well known...but if we have to rely on a guy who hit .217/.311/.316 for a 102 loss team and JimBo to get Adam...we're fucked. Austin can recruit Dunn till he's blue in the face, but he's not even guaranteed a starting spot this year. Zim's weight carries a 'lil more weight right now, I think.

On a similar note, if they can't get Dunn, the guy in this video comes highly recommended Who is that guy? I know he's a righty, but that's one sweet stroke.

Also, since he connected on 50% of the pitches he swung at, he's ahead of Dunn, WMP, and Kearns on the depth chart already.
Posted by Section 138 at Wednesday, January 28, 2009 0 comments

Well, crap. Until he pipes up, let me do it.

Hey, Keith... Your head is skinny and super tall. And someone told me your mom strongly disagrees with your assessment. Also, I hear you hate hate hate hate Jim Bowden. Don't let relationships get in the way of reporting, dude. Bottom three? Really? They were ranked 9th by Baseball America last year, and 21st this year. Take into account graduations (Lannan and Balester) and a few people getting hurt/regressing (I'm looking at YOU Marrero, Maxwell, Smoker, Willems, Detwiler), along with Blaaron Schmoe not signing, and I'm ready for a drop. But to be ranked either 28th, 29th, or 30th?

Labels: might as well start talking about the kids; haterade; ESPN anchors who should wear an eye-patch

Another rant, this time directed towards Pandora. Pandora, I love you, I really do. When I need to get work done, I close my office door, throw on my headphones, and open you up in a new tab. Right now I'm in a Dispatch and State Radio mood, so I'm pretty happy when Passerby pops up. Cool song..features the vocal stylings of both Chad and Braddigan, with general Dispatch goodness..


Not the greatest video, but you'd be surprised how few Dispatch videos are on YouTube. Chad is just starting his afro at this time, an turns it into dreads later.

So, I'm all done with Passerby, and I'm getting my work done when THIS SHIT COMES ON.


Pandora... What. The. Fuck? I have no clue who these folks are, but I know I want them out of my fucking head. Once Dokken (the wonderful people above) pops on, it's all downhill from there. I get Ratt and Cinderella and some other shit. (Which, btw, is just shit to me. I understand, some of you folks might dig this stuff. Me, though? Nope, not so much. That's what the fuck Pandora is all about, though. They play music that is similar in style. You get introduced to some new bands, and new songs, but they are supposed to share themes with the song or band you started your station with. Someone...anyone, tell me what theme Dispatch shares with Dokken? Big hair? Maybe. Got it...they both use guitars and drums. It's starting to make sense to me now.) The only way to get the stuff I enjoy back is to change to another station. Fuck sticks.

Yeah, I know it's been on for eight days already, but I still wanted to mention it. The MLB Channel is on Comcast and Direct TV in Montgomery County. I'm sure it's on elsewhere, too, but I can't vouch for that. (One thing I strive for here is 100% truth and accuracy. Nope. Can't even say that with a straight face. Almost made it, though.) It's on channel 280 on my Comcast digital cable lineup. The shows on it may be old, and lacking good production value, but there are a lot of things worth watching. Which brings me to my first complaint... When the hell is Comcast gonna update their channel guide to show what programs are actually on? Jesus Christ! All it says is, "MLB Baseball Programming" on the guide. But wait! I actually have a solution (imagine that)! Here is a handy dandy link for you to see what is showing on MLB channel. I bookmarked it yesterday, so it automatically loads 1/7/09 programming. If someone knows of a better intro page, please let me know.
So, enjoy the quality programming. One thing I'm looking forward to is the results of this year's HOF balloting. It will air on Monday 1/12 at 2PM. Followers of this blog know I can't get my SlingBox to load on my work network (Commie Tyrants!!) so I'll be recording it and watch when I get home. Anyway, I'm blabbering here, but take a look at the schedule, and I'm sure you'll find some stuff that interests you. They certainly have a ton of content, and I'm looking forward to watching it more often than talking with my wife.
Speaking of the wife, that leads me to my second point. Mrs. Section 138 was nice enough to let us use some of our wedding money (along with a gift card given to me by my coworkers) to purchase a 42" LCD HDTV. Yuppers, I've finally entered the 21st century. Gotta say, HDTV is mind blowing. I didn't think I would notice the difference, but now I don't even watch channels that aren't broadcast in HD. Well...except for... the fricking MLB NETWORK. Thanks, Comcast, for screwing me on that! My brother gets the channel in HD in Dallas, so why can't I? If anyone has anything other than Comcast, can you let me know if you get it in HD (DirectTv, Dish, Fios, etc.)?
Posted by Section 138 at Thursday, January 08, 2009 2 comments

From the mouth of Ladson.

According to baseball sources, the Nationals have decided to let Elijah Dukes and Lasting[sic] Milledge compete for the center field job.

I don't even know where to begin here (besides the obvious Bill Ladson Lastings misspelling), and I've been thinking about this for 13 hours. Seriously? Really? Here is what we DO know:
Erm, 'scuse me for pointing out the obvious here, but it seems to me that if Milledge comes up losing that CF gig to Dukes, it's safe to say he won't be playing RF. Don't forget, we still have Kearnsie (for now), whose defense it much much much better than LMillz's.
More of what we do know (with a very small sample size, granted):That Dukes avg includes a pretty miserable 07 for the Rays, as well. Looking at those lines, which guy is more suited for a corner OF spot? Nah, you don't even need a hint, do you? Again, if Millz looses out to Dukes for the CF spot, what position does he go to?

Look, I'll admit Milledge didn't play the best CF in the world last year. I do contend, however, that he made tremendous strides out there. His defense at the end of the year was waaaaay better than his defense to start the year. He used to track fly balls by guessing where it might land, and make the biggest circle possible to get to said landing point. At the end? He would guess where it might land and make a neat little... arc. But, hey, it's progress, right? Also, let's also not forget, folks...Millz did take out Utley on that double play ball.

My point is this... let both of them fucking play, for Christ's sake! Dukes probably has the biggest upside right now of any Nat, but gosh-darnit, Milledge ain't no Nook Logan. PLAY THE KIDS! Now, this point becomes moot if Millz outplays DOOKS! for the CF spot, but I wouldn't go bet the house on that. An outfield of Willingham/Milledge/Dukes intrigues the shit outta me. Let's give it a go, Jimmy Bo. Finally, more of what we do know: 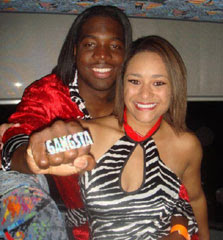