How sweep it is!

Why yes, that headline is a duplicate of a tweet I made last night. Big whoop, wanna fight about it?
Our valiant band of brothers, dressed in red, white and blue, strode strongly into Citizens Bank Park (or is it Nats Park North*?) and proceeded to layeth the smack down on the Phillie's roody-poo candy-asses. (How many readers did I lose with a wrestling reference? Three? Gah! You other two, please stay! I'll make s'mores, and we'll sit by the camp fire singing songs and shit! Don't leave me!)
Three days later, and the final tally in games won was Nats: 4, Phillies 0. In high fa-looting baseball circles, where they use terms like "babip" and "fWar," they call this a "sweep." Wait... Did somebody say "Sweep?!" Clean up in aisle nine, Danny! 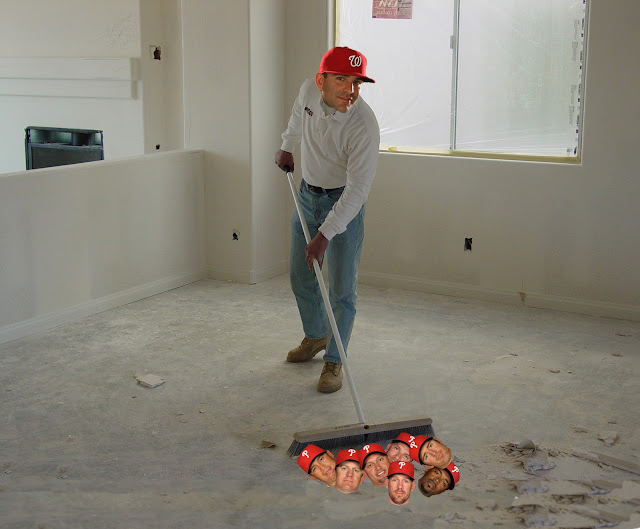 I really could have chosen a lot of Nats to be pushing that broom; any of the starters (besides Lannan), Wilson Ramos, or even Zim. But Danny gets the nod for two reasons:


Yes, gone are the days of seeing this glorious sight multiple times a day, as I had it set as my homepage for both home and work browsers. Baseball-ref wanted waaaay too much money for me to renew my sponsorship (we're talking multiple cases of Sam Adams Double Bock prices here! /no beer snob), so I'll now have to be content to just gaze upon it longingly, like Ray King does a cheeseburger. Like Lastings Milledge does a nice easy route to a flyball. Like Cliff Lee does a Danny Espinosa at bat against him resulting in, well, anything but a home run. (By the way, if anyone would like to donate money towards either renewing the sponsorship or Sam Adams Double Bock, well, what the fuck are you waiting for? Paypal: phishisgr8@gmail.com, dammit!)

* I don't know who to credit "Nats Park North" to, as I saw it floating around on Twitter quite a bit. So, to whoever you are, Mr. or Mrs. Witty Word Play, I salute you. May your house be blessed with many winning seasons, and shall no one enter with the intention of neither vomiting upon you, nor punching you in the face in the name of Philadelphia. If that does occur, however, feel free to mention the 2011 season, and how the final head-to-head series win count was in favor of the Nationals 10 to 8. But have at least 18 apples ready, as you will have to teach them what the numbers 10 and 8 mean, and how 10 is greater than 8. Might as well get at least 20 apples, though, as it could take days to teach folks from Philly how to count, and you're gonna need to eat. (Bang! Pow! Zip! Right in the kisser! I just said Philly folks can't count, which every 3-year-old in the country (outside of Philly, that is) can do! I WIN!!111!)
Posted by Section 138 at Friday, September 23, 2011 3 comments