Look... a lot has been written about last night's debacle of an attendance situation (here, here, here, here), but there's one thing in particular that pisses me off. What is it? Shocker, it's the Phillies fans themselves. And I'm not talking about how bad they smell, how bad the behave, how poorly they treat others, or how little respect they display. Nope, I'm talking about how GOD DAMN FAIR WEATHERED those bastards are. It's real funny... you chant "this is our house" last night at Nats Park, when you couldn't have been bothered to support your team just a few years ago. A quick breakdown of the Phillies home and away attendance.

So, I wondered how that does in relation to the Nats, with their record being quite a bit worse. Well, so far for 2010, with their record at 67-90, the Nats are still averaging 22,645 folks. Yup, that's more than your city did in 2002 when you finished with 13 more wins. What's that, Philly fans? "But you guys have that new stadium"? Okay, let's go back to the last year in RFK (not the greatest stadium in the world to see a baseball game): 2007. When the Nats finished at 73-89. Still 7 games worse than your Phillies finished in 2002 when you managed to average 20,208 folks, good enough for 24th in MLB. How did the Nats fans measure up?

2007 Nats Home - 22,715 (24th)
Correct. In a shitty ass stadium, while watching some shitty ass baseball, DC still managed to clear more fans than you did even with your better winning percentage. So chant "this is our house" all you want. At least we know that a lot of you were nowhere to be seen when your team was playing break even baseball. Mental note made... When the Phillies are playing .600 ball, though, those fans sure do make it out to the park in droves. Good to know your priorities are where they are - with winning teams only. You're doing a bang up job of defining "front runners" fellas!
Posted by Section 138 at Tuesday, September 28, 2010 10 comments

Labels: I will destroy your fuckin face Utley, philthies, ugh

Here's to you, Atlanta!

Now, I wasn't lucky enough to attend any of the Nats games down in Atlanta this week, but I did have some friends go down there. They were happy as... well... Nats fans when the team takes two out of three. Which doesn't happen often these days, and it surely wasn't expected against the Braves since they are (were?) in the midst of a playoff showdown with Philly for the top spot in the NL East.

Looking back on it, though, a large breakfast food chain that my friends stopped off at before yesterday's game seemed to know what the outcome was going to be. After all, when my friends walked into this restaurant, they were handed this flyer. 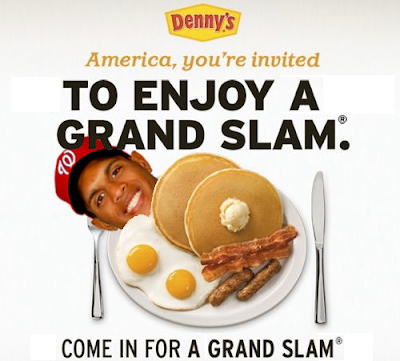 It appears they had a promotion going where if you purchase a meal from Denny's, you got to witness Justin Maxwell LAY DOWN THE LAW.

Come get some loving, Danny Espinosa!

So, since I don't have anything worthwhile to add... It's SING ALONG TIME! LOVE YOU, DANNY!

What to Make of Nyjer Morgan's... Antics.

On August 25th word broke Nyjer got a seven game suspension for throwing a ball at a Philly fan. (A suspension for hitting a Philly fan with a ball? Shit, I'd give Nyjer a reward. How about seven dollars? Cause, well, I'm poor. Fuck it, I'll raise that reward to also include seven fist-bops! Cool? Cool.)
Four days later, on August 29th, he took a needless shot at the Cardinals catcher, taking the catcher's glove off and missing the plate entirely in the process. The 31st rolls around and he separates the Marlins catcher's shoulder while bowling him over. And then... well, last night the brawl happened.
Look, I'm not here to talk about whose fault it is, or the ethics of fighting in baseball. I mean, I care about that shit, but it's being talked about to death. Let professionals write about that, and I'll ask the important stuff. Like... what in the hell happened to the "ah, shucks" Nyjer that we knew all last year? I mean, this dude's personality turned as quick as anyone's I've seen. I asked this last night on Twitter, but whose heel-turn was more surprising, Nyjer's or when Shawn Michaels super-kicked Marty Jannetty to break up The Rockers? Hold on a sec here... just gonna go back and watch that clip. HOLY SHIT! How come I never noticed this before? That wasn't Shawn Michaels at all! That's... That's... That's Nyjer Morgan's music! 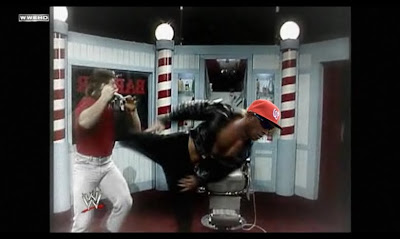 (Thank you for allowing me to veer off into wrestling land. Much obliged. Anyone still reading? No? Ugh...)

Seriously, what happened to the guffawing Tony Plush that everybody fell in love with? I guess it turns out that he's got a wicked temper just no one had pissed him off enough? Maybe he snaps when pushed far enough? Maybe, just maybe... he's not a nice guy at all...

You see, I did some investigating into Mr. Morgan, and found a destroyed digital camera in an evidence locker of a police station. It was evidence in an investigation into an assault and battery that was never solved. They found the victim in a hospital just muttering to himself, over and over... "I should'a listened to him. He kept telling me not to make him angry. Oh, God. Why did I have to go and make him angry?!" From that smashed camera I was able to pull one picture. The very last picture that the camera had taken.... 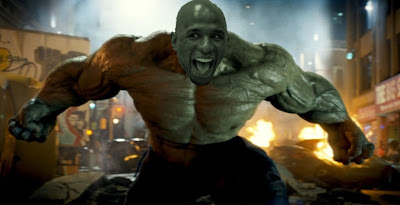 Oh. My. God. Anyone know a lawyer I can get a hold of? I have a feeling I might need one. Well, that and a hospital once Nyjer finds out I unearthed this pictu


DIS IS INCREDIBLE PLUSH. SECTION138 GONE. ME SMASH! ME SMASHED HIM GOOD!

NEED TO FIND AUTOMOBILE TO STEAL TO GET TO FLORIDA. YOU WISH INCREDIBLE PLUSH GOOD LUCK AS INCREDIBLE PLUSH VERY BAD AT STEALING.
Posted by Section 138 at Thursday, September 02, 2010 3 comments