Ian Desmond will steal your opponent's soul, then your batting helmet.

You know, I always find myself watching every Nats game. I don't think it's healthy, really, but it keeps me from walking alleyways and punching strangers in the head and face, so there's that. Anyway, if I'm not at the game in person then I'm watching it on TV. Whether it's at home, at a bar, or at work, it's on. I find myself watching much more than just the action that takes place when the ball is in play, too. For instance, remember when I made that movie about Adam Dunn and Josh Willingham's home run celebration? (You don't? Can't say I blame you...)
Well, I picked up on something at some point during this season, and it's the fact that Ian Desmond likes to pluck the batting helmet from the head of a Nat that just hit a home run. I can't remember when I first noticed it, though, so I went back through all of the ten home runs hit by the Nats this season. The first home run came on 4/7/12, and it was hit by Adam LaRoche. Persusing the video evidence, we can see that someone does, in fact, remove his lid for him. We just cannot see who:

Yes, Desi is behind him, but we can't see clear proof that he took it from his head. In fact, Desi's then seen high-fiving some dude I've never seen before a split second after LaRoche's head is exposed. Now, without further ado, let's explore the other nine home runs the Nats have hit after the jump, shall we?
Read more »
Posted by Section 138 at Monday, April 23, 2012 4 comments

Please allow me to do my best Dan Steinberg and transcribe what happened on the last play of the game. Situation: Bottom of the ninth, Nats down one. Ian Desmond on second, two outs, Danny Espinosa at the plate.

/SMACK goes the ball off Danny Espinosa's bat into CF.

/A whole entire fucking play unfolds since, you know, THAT'S HOW THINGS WORK.

GAH! Look, I've talked about this in the past. In fact, more than once. I've even made videos poking fun at him about it. But this one, I didn't make up. See for yourself:


Hella Horrible, Carpy Baby. from Section 138 on Vimeo.
Now, I know the call wasn't being piped into the dugout. And I know that Rick Eckstein and Davey aren't looking at Bob with this "Are you fucking serious?" look. But... I choose to ignore ALL OF THAT and pretend that Davey and Rick are dumbfounded at Bob Carpenter's call, not the umpire's. 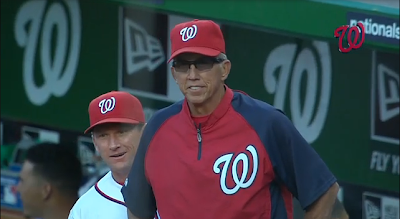 So, Nats lose. But, that wasn't even the worst part about the entire game. What was? It was seeing Chorye Spoone's name pop up when he came into the game, going through the 1,000 different ways I imagened his name was pronouced, only to have it be said as "COREY SPOON." Are you kidding me? Fuck it, he'll always be "Chore-eye Spoon-eh" to me. Take that, Chore-eye's mom and dad!