If you said no, don't worry, home plate umpire Tom Hallion missed it, too. If you said yes, well, while technically Nathan striking out Yamaico Navarro in the second inning was his first, you still didn't really see his first.

I emailed Tom Hallion* a link to my site, and told him I had a post dedicated to him, and asked him to please stop in. I'm going to take this moment to address a certain at bat with Mr. Hallion, so you guys just blend into the background of wherever you are, as to not scare Tom. Also, if you have gum in your mouth, please don't snap it, and make sure your ringers are on silent.

So, Tom, it's the top of the first inning. Manny Machado, the second hitter of the ballgame, steps in to face Nathan Karns. (Real men use their entire first name, Manny Manuel.) The count gets to 0-2.  And, well, here's the video tape:

That pitch looked good to me, dummy!

You called the pitch in question a ball, when it was clearly not a ball. At no point in looking at this plot does it even appear it could ever be construed as a ball.

Are you with me, Tom? Look, here's the pitch track with arrows pointing to the ball in question, Tom. See, you need those arrows cause you all blind and stuff, apparently.

... and have you seen some of their strike three calls?)

The Washington Nationals failed against the guy least likely to cause failure.

Hey, yippee, woo-hoo. The Nats were shut out (and limited to 3 hits) by Ryan Voglensnog Vogelsnogog Vogelsong. RYAN VOGELSONG. Vogelsong was the baseball pitcher guy that threw spheres from that raised mound of dirt 60 feet 6 inches away from that home plate thingie worse than any other baseball pitcher guy in all of Major League baseball up until last night. He had an 8.06 ERA, and had yet to give up less than three runs in any of his starts this year and sported a whopping 1.853 WHIP. Last night's line against the Nationals? 5 IP, 3 H, 1 BB, 0 R. That's a line that equals a 0.00 ERA with a 0.800 WHIP. Anyone have an authentic Ray King game used belt? That should easily be long enough to throw over the rafters and hang me with.

Now, please allow me to summarize your performance as if it were, say, and entry into a baseball exam.

Mr. Washington Nationals Baseball Guys, what you've just played in is one of the most insanely idiotic things I have ever seen. At no point in your rambling, incoherent game were you even close to anything that could be considered a rational contest. Everyone in this room is now dumber for having watched it. I award you no baseball points, and may God have mercy on your soul.


I seriously can't write any more on this subject.

On the bright side of things, this has brought back my drinking habit from 08/09/10. Oh, sweet, sweet liver failure. How I've missed wooing you so. I just need the Nats to play about 5 more of these kinds of games, and we'll be BFFs.
Posted by Section 138 at Tuesday, May 21, 2013 0 comments

Labels: call me when this goddamn series is over, Fuck you King, look I did that thing where I pretend I can't spell the guys name right, Suicide, ugh, what sport are these guys playing

Danny Espinosa has an arm that throws objects incredibly fast, far, and accurately.

Well, looks like it's time to show off Danny Espinosa's cannon, RPG, howitzer, bazooka, missile launcher, [insert other metaphorical object here] yet another time. Which suits me just fine, since Strasburg threw 3 & 2/3 innings of perfect ball and lost, while Gio threw 5 innings of perfect baseball, but also managed to lose.
Take it away, Daniel-san.


I must say, all those days of Mr. Miagi having Danny pulling down a lever from his grain elevator sure did pay off.
Crap, there goes my afternoon. Now I'm going to be picturing a Karate Kid "Mr. Miagi puts Danny Espinosa through menial chores which Espi does begrudgingly  only to find out that Mr. Miagi has, indeed, given him every skill needed to excel at baseball" montage the rest of the day.
Now, if only Miagi could teach our boys how beat 13-22 teams. It should be so damn simple. He could, like, have them practice taking tootsie rolls from 8-month-olds. Or have them practice up-selling Tony LaRussa to the 20oz beer. Kid's stuff, really. Sigh.
Posted by Section 138 at Monday, May 13, 2013 0 comments

Labels: crappy ass video, Danny has one serious right arm on him, espi, Tony LaRussa is a jerk and also got a DUI while asleep in his car

ZNN. ACE. GOOD. ZOMG. GOD. Look, whatever short, all caps word you choose to apply to Jordan, they all fail in conveying what he truly is, and is all about. That word don't even exist yet. Besides, who likes having to read a bunch or words? Words are for suckers. Let's go to the videotape to describe him:

Oh. I see. "STUD." Very apropos.
Above words aside - if you do want to read a bunch of letters formatted into words and paragraphs to describe how good Jordan Zimmermann is, here are some:
Zuckerman.
Citizens.
Comak.
Enquirer.
Posted by Section 138 at Thursday, May 09, 2013 1 comments

To be honest, if I tried to write anything about the absolutely galling actions made by John Hirschbeck in yesterday's game, I might be here a while. Instead, I dealt with it how I normally do; with stupid stuff.

Here's what really happened to cause Harper to be ejected.

That's right, I made a "LOL Hirschbeck be old" joke. It was either that, or point out how he refused to side with most of his umpire brethren in 1999, and instead used it as an opportunity to take over as president of the umpires... clan.

If you want some good reads on the ejection, lookie these, if you haven't already.

SBNation.
Hardball.
SI has a bit about this incident, as well as a look at these new thin skinned scamps in blue.

Labels: Bryce Harper, good thing we payed a whole ton of cash to see the 3rd base umpire, holy god hirschbek had an agenda

I've figured out what the 'M' means!

This has always stumped me: 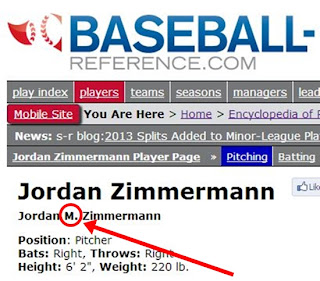 What does the 'M' stand for? Well, after ZNN's last two games, we have come to the only logical conclusion.
Read more »
Posted by Section 138 at Thursday, May 02, 2013 0 comments

Labels: i'm sorry, NN, this is like the stupidest thing ever, What in the name of Christ, ZNN
Newer Posts Older Posts Home
Subscribe to: Posts (Atom)
Feel free to direct your hate mail here