That dude that was in Babe has been in a bazillion movies and TV shows, and has been nominated for one Oscar and three Emmy Awards. Yet, I still can only think of him as the farmer in Babe. And I use that quote in the post title all the time. I mean, I love my wife dearly, and she knows this (I think), but why in THE hell would I ever find myself saying, "That'll do, pig. That'll do." when she asks me certain questions? It's insane, but I do actually say it to her. I mean it to be nice, but there is no way in hell any woman is ever going to take it that way. Yet I still find myself saying it. I know she's gonna leave me one day for it, and my daughter is going to run away from home in 15 years because I'll keep saying to her, but I can't stop. It's like an addiction. I'm addicted to farmer Arthur Hogget's Babe quote. Is there rehab for that? Anyway, my post title was meant to indicate that Danny Espinosa and Ross Detwiler are gonna do just fine. Oh, and if that's the only thing you take away from yesterday's Nats Braves game, then you're doing it right. Aside from those two, the game was an absolute shit show.
Ross went 3 innings, giving up one hit, walking one, while striking out five. Those five strikeouts include the last four batters he faced for the day, too. He did happen to give up a run, but it was unearned as Ian De6mond started right where he left off last season with a throwing error. Yup, Ross probably stood loud and proud after yesterday's showing. He might have even gone to a local drinking establishment last night to order an alcoholic beverage or two in order to celebrate that outing. Unfortunately for Ross, he looks exactly like the 16-year-old kid that plays a 14-year-old kid on that show Parenthood, and no bartender on earth would serve him. (What? Yes, you have seen that show. It's the one with the guy from that '90s TV show Coach now playing the grandfather. You remember Coach, right? It was the show about the Minnesota State University Screaming Eagle football team. One assistant coach was played by Jerry Van Dyke, and the other one's name was Dauber. Still not ringing any bells? Okay, how about the fact that Parenthood has the guy who played Casey McCall in Sports Night playing the son of the Coach guy? Still nothing? GAH, you people are uncouth peasants!) But, seriously, even if Ross showed his ID, they'd laugh him out of the bar. Bryce Harper probably has to buy the bears and slip them to Ross under the table. Don't believe me? Okay, smart ass, which one of these two dudes is a 25-year-old baseball player, and which one can't buy porn yet? 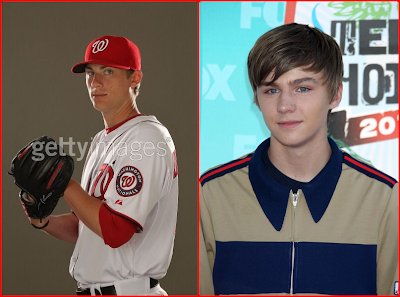 Yeah, well... If Ross wasn't wearing his stupid uniform, you never would'a got it!

Now, Ross would've given up two runs yesterday if it wasn't for MY MAIN AMIGO, Danny Espinosa and his WWII era artillery gun for an arm. I mean, really, seriously, it's a ridiculous bazooka arm that Espinosa has. Jason Heyward was on first, and some jabroni hits a double. Nyjer is playing shallow and has to run to the warning track to get it. Nyjer grabs it, throws it 100 feet to Danny (on a goddamn HOP), who whirls around and... well... here's the video to show you how it worked out. I spliced footage that I got from inside the park about 35 seconds in. It has sounds from the outfield that we didn't get on the TV broadcast.

Yup, yup. 200 feet on the fly. I saw Wilson Ramos crying in the dugout after the inning. He had to have Danny come over and kiss his catching hand to make it all better. (True story!)

It also didn't hurt that my jersey came in on Saturday. What jersey is that, you ask? Well, let me show you! 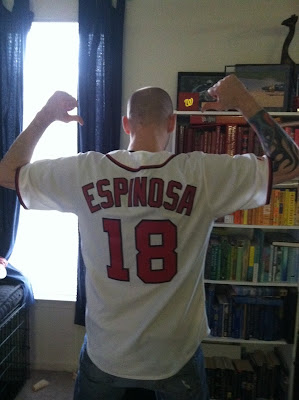 BAM! How you like them apples? Now, the only thing that is guaranteed in the world, since I bought this jersey, is that Danny will change his uniform number. Because he hates me. It's probably from that time that I ran after him in the players parking lot after a game last year. I just wanted to hug him, since he's all cuddly looking. I tripped while I was running to grab him, though, and hit Nyjer's car with my face. I then flipped over Nyjer's hood and landed onto Desmond's car and put my lower torso through the windshield. Yeah. Pretty embarrassing moment all around. Especially since I was still screaming for Danny to come and hug me as the paramedics were trying to extract me from Ian's vehicle. The fact that they had to cut my clothes off might have weirded him out a bit as well, cause I was showing him my man bits... but, whatever. I'm cool. In fact, I'm sure he's forgotten the whole thing.
Posted by Section 138 at Monday, March 07, 2011

Labels: Det, espi, Jesus could i write any more, shorten it up tolstoy

Oh, and mine is a World Series Replica. Say about that.

Your link brings up a 404 error. If that was your intention, bravo.

Also - My Espi jersey might not be World Series replica, but it's a 2011 Spring Training leader in RBI replica jersey.Say bout that?